Yes, it is a fishing title.

Introduction I declare that it is a violent fan of Ubuntu (Unity).

Three years have passed since I began to regularly use Ubuntu, the other day,
there is an announcement that the desktop environment will change from Unity to GNOME from Canonical,
so I have not recovered yet, so I feel that I am organizing my feelings I will write.

It was a feeling close to broken heart.

Let's begin by looking back on our encounter with Ubuntu . . .

It was around a year since I joined the system company.

In the business practices of the company, we used Windows in many cases. Still sometimes I handled GUI versions such as CentOS and OpenSuse, but I felt honestly weak.

The concept of permissions and the unfamiliar directory structure are one of the causes,
but it is also great that I felt the coldness in the green and blue interface now thinking.

In the world there was some flow that OS refugees began using Ubuntu after receiving Windows XP support end,
and I used Ubuntu to try themselves using Windows 7 too.

still remember vividly that I was shocked by UI of Orange and Violet.

↓First of all let me introduce my desktop environment. 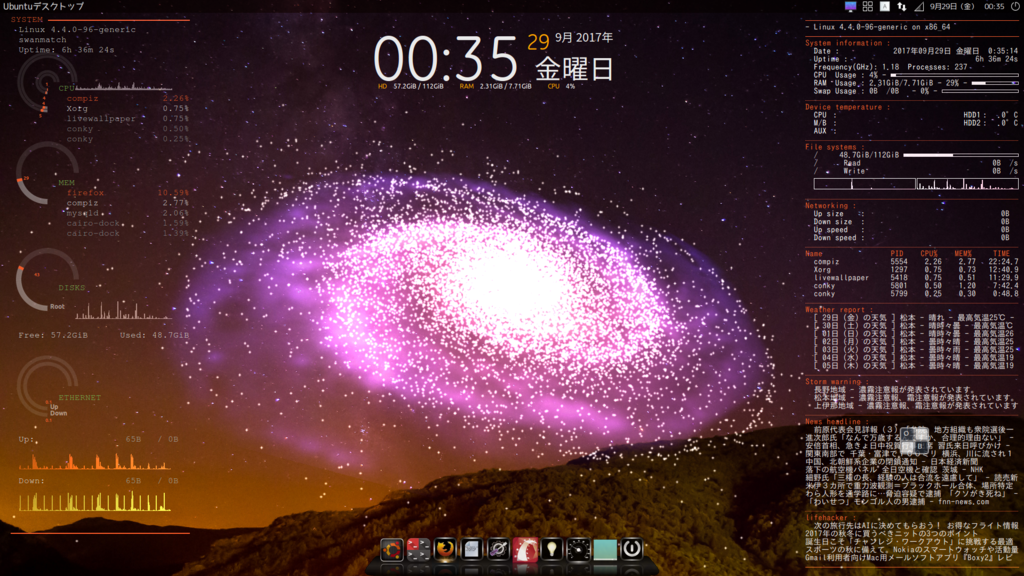 ↓MOVIE(VIM is a bit strong)

First of all, I will try to organize what Ubuntu (≈ Unity) has captivated myself.

Factors that decided to escape from the MS system OS were
large existence of highly flexible UI such as compiz, cairo-dock, conky,
in terms of "Unity" it is two points below.

It is probably the only UI in the world.

I also knew that it was named LIM for the first time while I was fishing information on
how I managed to do something with GNOME and MATE.

Briefly, the application menu is basically hidden, and the title bar becomes a menu bar only when the mouse is on the title bar of the window. 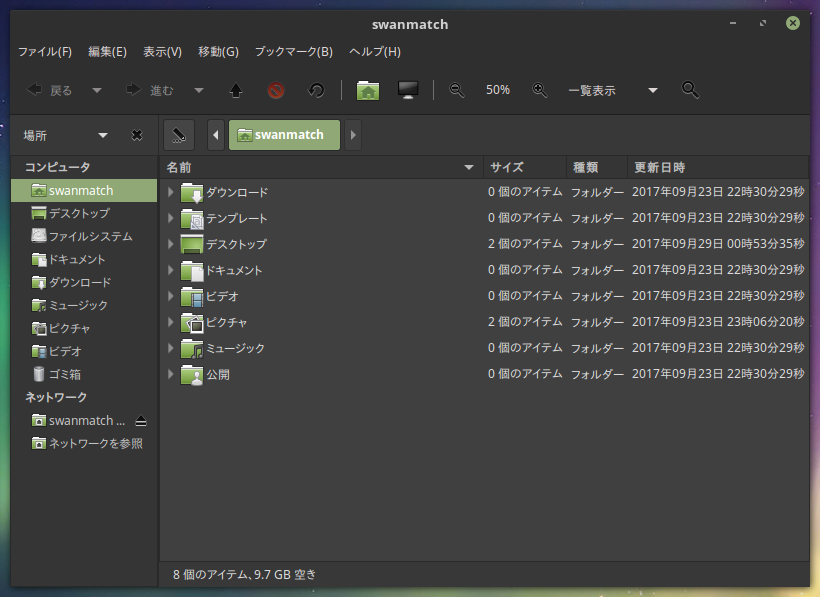 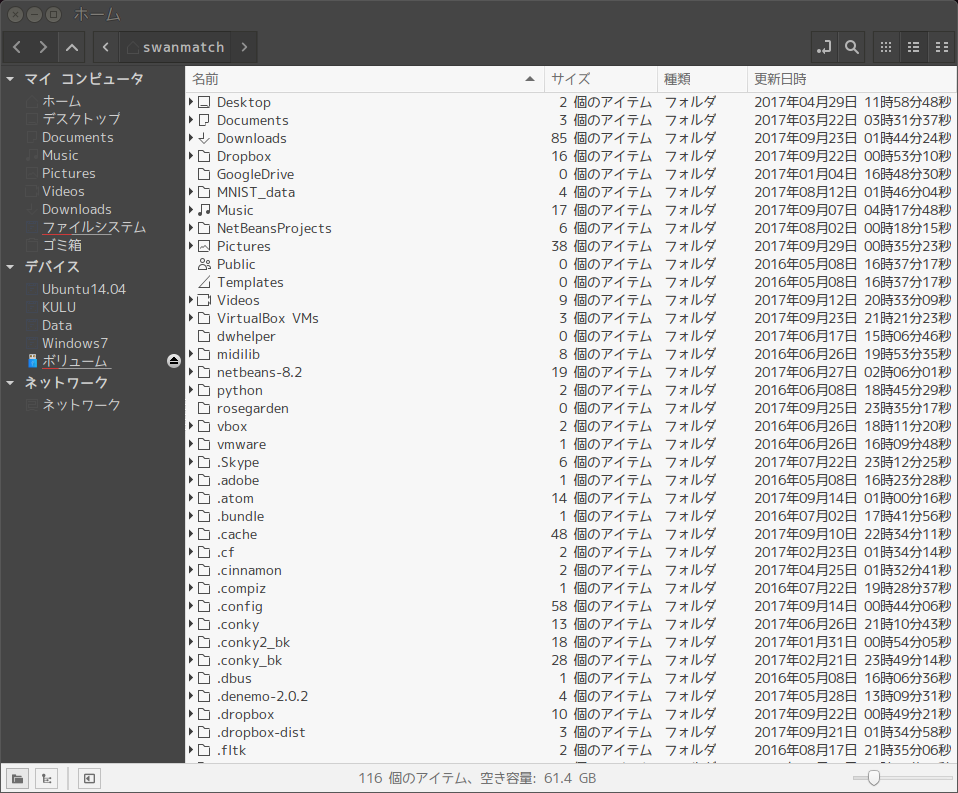 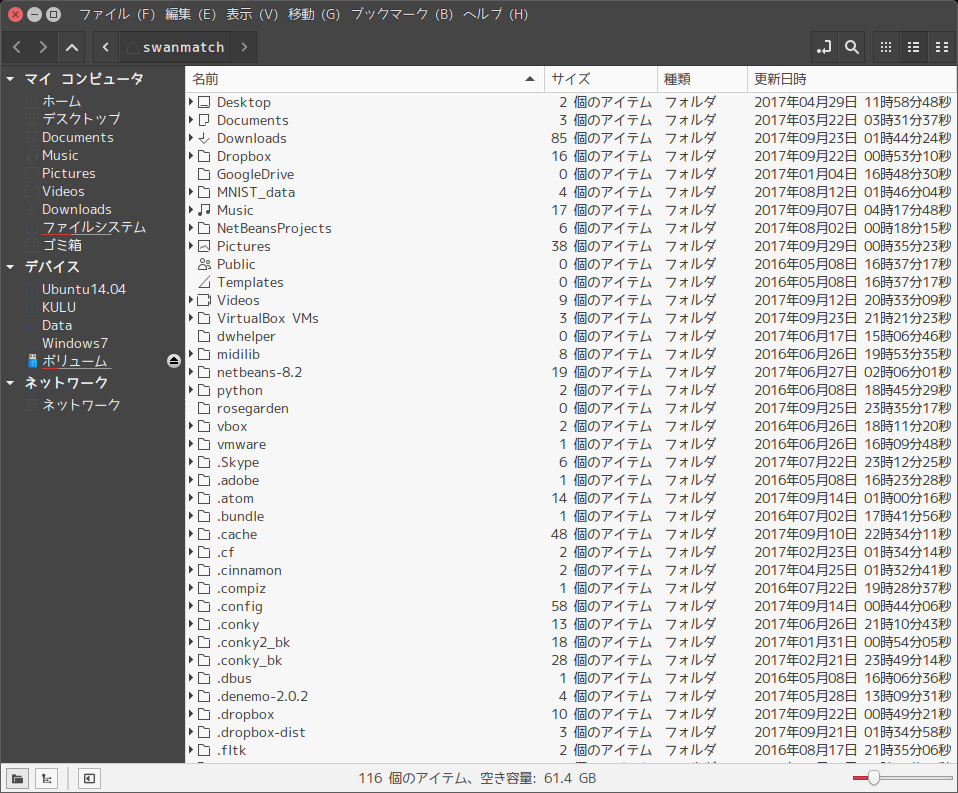 // By default, it is a function to display the application menu on the panel,
// but as the movement of the mouse becomes large,
// many users including the author will be displaying it on the window menu.

In other words, because there is no application menu,
the area that applications can use increases by one line.

Although it is only a line, it goes without saying that
it is a big difference for programmers who use computers for hours on days.

The author who usually uses firefox has further merit by LIM. 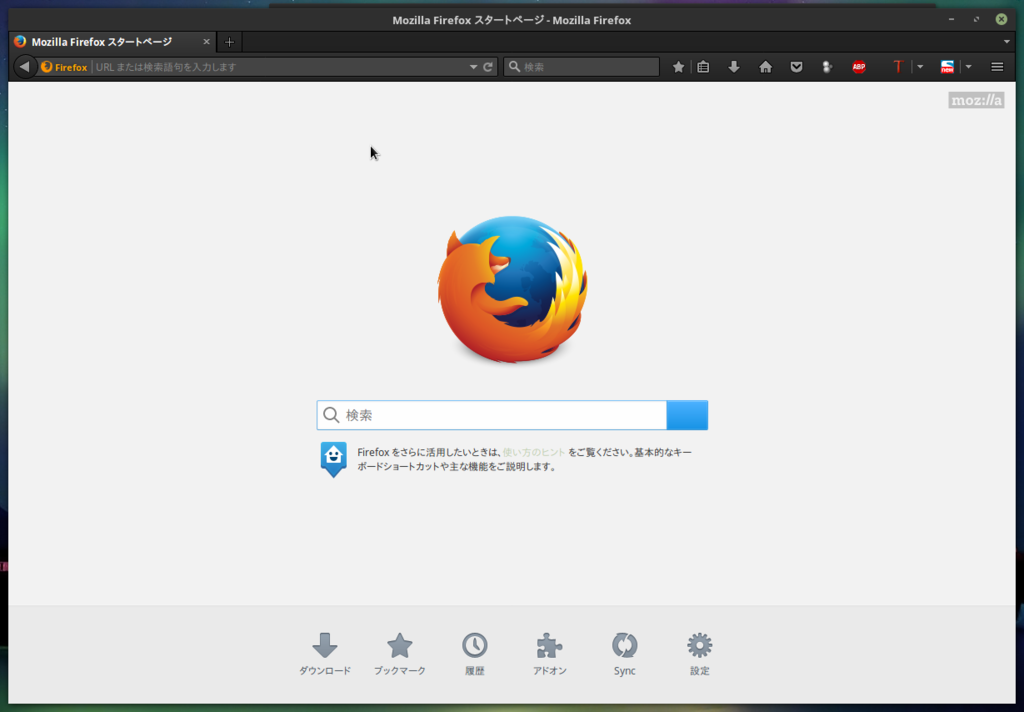 ↓ Appears when pressing the Alt key 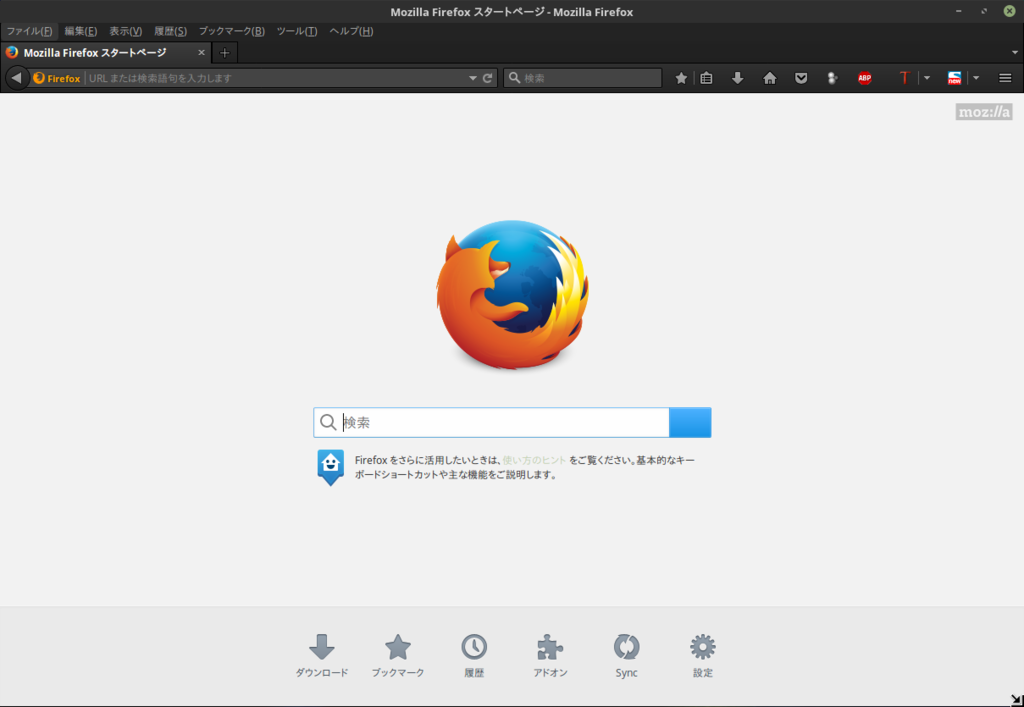 However, this is somewhat low usability.

Because, unlike IDE, terminal and text editor,
the user operates the browser with the mouse,
so the keyboard operation is rather disturbing.

In that respect, if you use Firefox with Ubuntu, You can access the application menu by hovering to the title area
without pressing the Alt key every time. 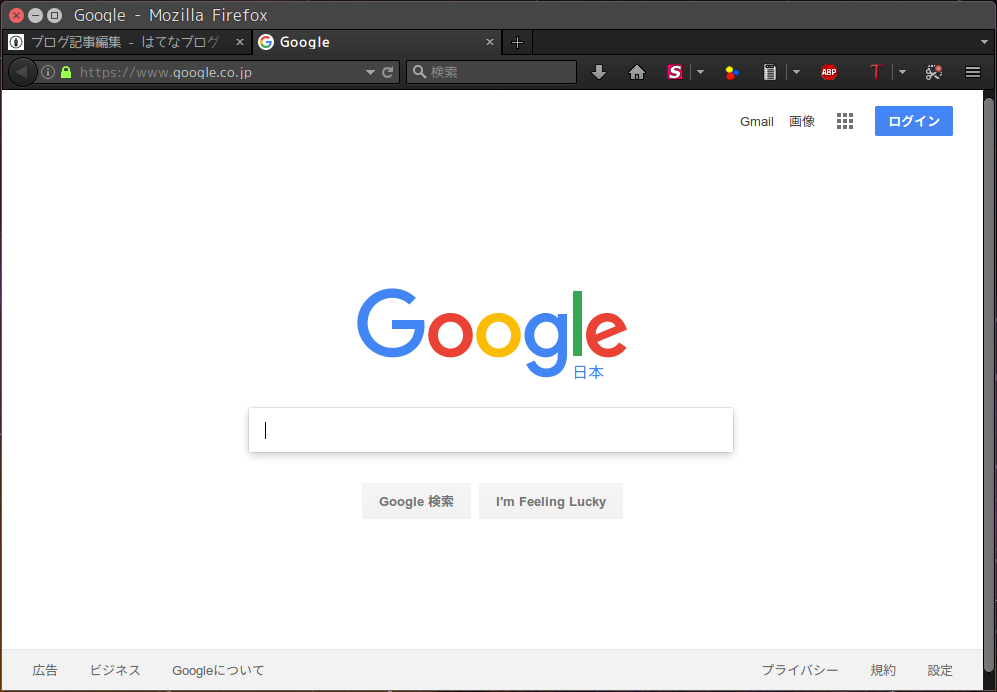 ↓Appears when mouse over 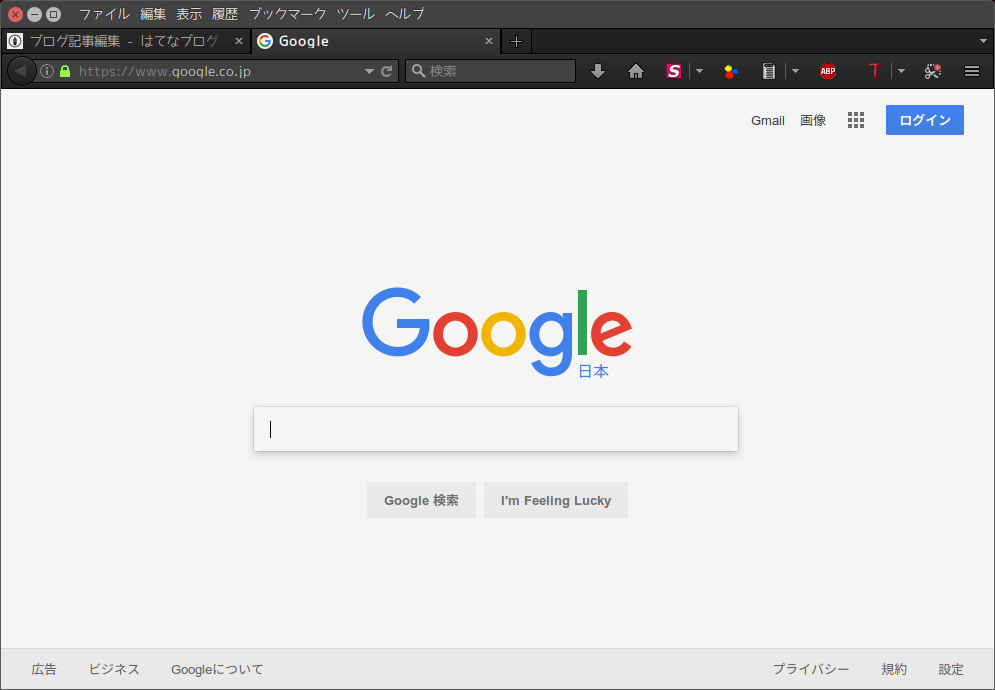 When maximizing applications other than Firefox LIM will show even more!

When you maximize the window, the panel and the title bar merge!!

When maximizing a text editor etc.,
It will be wider area that can be used for two lines compared with other OS! !

↓ A title bar at the top of the screen, an application menu below it.
Panel at the bottom of the screen.
(The position of the panel can be changed and hidden automatically.) 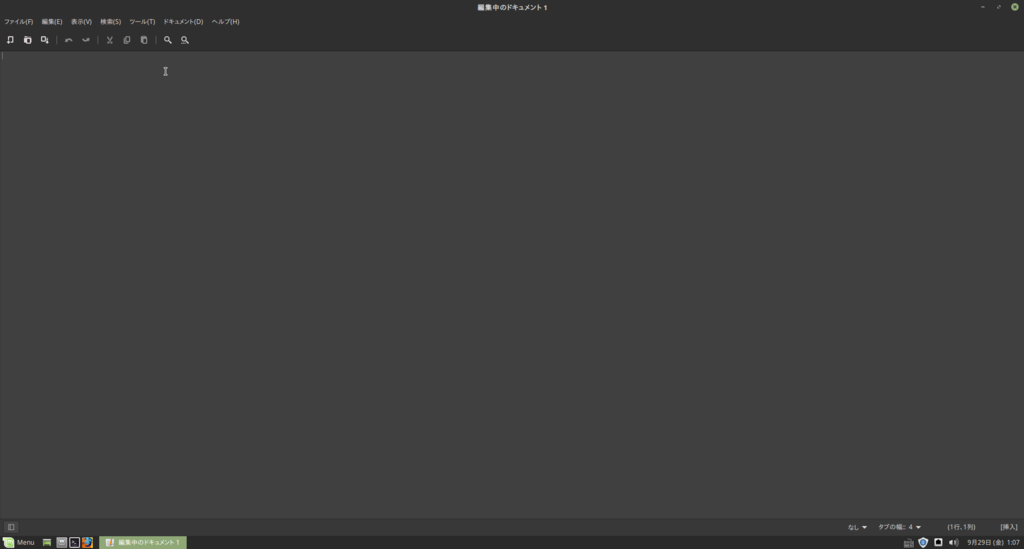 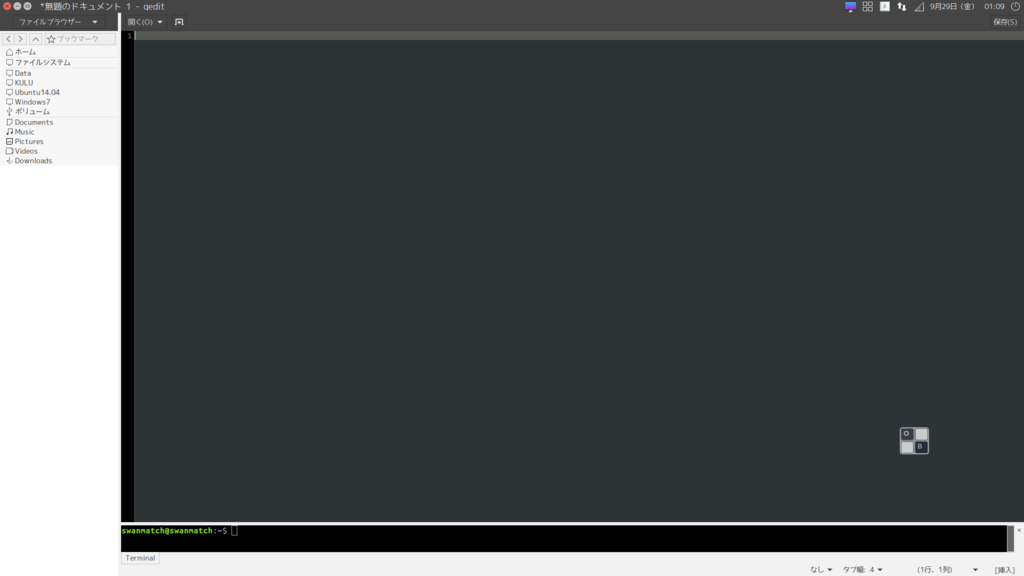 Again, it seems that the voice saying "only 2 lines ..." is coming,
But this means that the application can use the whole screen!

t's as close as possible to full-screen mode! !

Once you use it you will feel a feeling of openness.

Would it be forced to place the close button etc. for LIM on the upper left of the window
if it raises the disadvantage strongly?

Regardless of the Mac , it must have made sense of discomfort to migrants from Windows .

// By the way it is impossible to move the Musumey button to the left,
// but I will not introduce it here because there are too many things to lose.

A launcher located on the left side of the screen

It seems that it was one reason why Unity is unpopular.
(It became possible to place it at the bottom of the screen from 16.04)

This is also caused by the fact that there are many users
who have the task bar at the bottom of the screen with Windows and other OS.

However, since I was in the Windows era, I was originally moving the taskbar to the left of the screen.

This is to minimize mouse operation when possible.

Basically the files are placed from the top left on the windows desktop.

The application menu is also at the top left.

In other words, rather than placing the task bar at the bottom of the screen,
moving the mouse to the left requires less mouse movement.

However, in Ubuntu, noticing on the way that important UI does not necessarily come to the upper left,
I keep the Unity launcher hidden, set CairoDock at the bottom of the screen and use it.

Since I am also a programmer, it is easy to imagine how hard, it is to develop and maintain my own desktop environment.

Let's say Unity has no choice but to end of life.

Still I do not really agree that GNOME will sit in the trail of Unity.

t is true that Unity is generally unpopular in general, but I have never heard of a user who returned to Gnome!

I think that such users first evacuated to LinuxMint.

Perhaps Canonical chose to go back to Gnome,
taking into account that other official flavors were unpopular,
but users who want to use Mate, for example, use LinuxMint,
so those who use Ubuntu Mate It is not bad.

I want to say a loud voice.

GNOME , you are not!

I never thought Ubuntu (≈ Unity) I loved so much,
will not be supported from Ubuntu (≈ canonical).

I am completely OS refugee...

Because, as far as I know, there are no other OSs that Unity can use.

I have not found a clear answer yet,
Currently I am considering using Mint MATE.

// Because Compiz can not be used as a reason not to be Cinnamon. swan-match.hatenablog.com

I am praying that I can use the above mentioned LIM at GNOME or MATE if possible by 18.04 release.

The introduction became long, but what you want to say is often said.

Let's pay for good ones!

I think that the reason why Unity is out of the default desktop environment is due to lack of Canonical 's physical strength (≈ money).

Let's make some form of donation to free software you do not want it to disappear. Of course, the amount of money can be small.

I also bought T - shirts and stickers from CanonicalStore a bit, but it seems it was not enough. (Shipping will be higher as it will be sent to Japan from the UK) 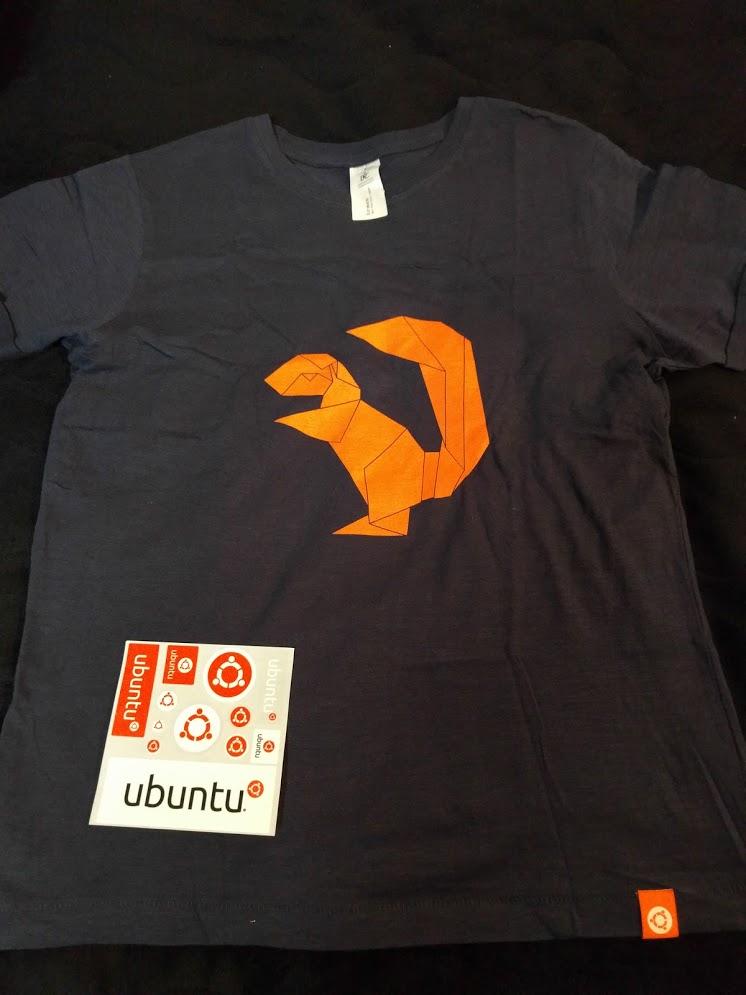